Extensive, inaccurate and costly manual work, total waste of material: Up to now, many processes in aircraft construction have been carried out manually or only semi-automatically. This includes the filling of industrial hexagonal structures, so called “honeycombs”, which are essential for interior fittings. They form the core of the commonly used sandwich components. On the one hand aircraft components must be as light as possible, but on the other hand they must meet the high safety and stability requirements. Typical interior applications for honeycombs include floor panels, luggage compartments or side and partition wall claddings. For structural reinforcement or to obtain stable joints, the honeycombs are filled with core or edge fillers. Strict requirements apply to these so-called “core fillers”, especially with regard to fire protection. And, of course, they must be as light as possible. 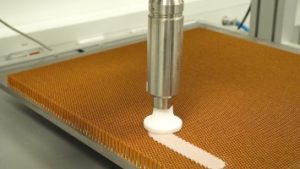 Experts see the aerospace industry as a key sector for Germany as a high-tech location, for which above-average growth is also predicted over the next few years. According to the Bundesverband der Deutschen Industrie e.V., orders for more than 30,000 aircraft are expected over the next two decades. (https://bdi.eu/luftfahrt/). All the more attractive are time and resource-saving work processes in this area, which increase added value. The core competence of ViscoTec Pumpen- und Dosiertechnik GmbH lies in the manufacture of dispensing components for semiautomatic and fully automated production plants. The company has therefore carried out extensive tests together with representatives of the Automotive and Aerospace Solutions Division of 3M Deutschland GmbH. The focus was on automated honeycomb potting with ViscoTec dispensing technology and 1 and 2 component core fillers from 3M. The 1-component material 3M™ Scotch-Weld™ EC-3450 FST, one of the materials with the largest market share in this area, and the 2-component material 3M™ Scotch-Weld™ EC-3500-2 B/A were tested. Both materials are epoxy resins with a density between 0.60 g/cm³ and 0.65 g/cm³ due to the addition of hollow glass beads. The requirements for an automated process are high: The filling compounds are very shear sensitive. If the hollow spheres get destroyed in the dispensing system, the density increases. This in turn has a direct influence on the weight of the components. Core filling also requires the reproduction of a wide variety of shapes and patterns: Lines, circles and solid surfaces. In addition, both materials are very highly viscous. 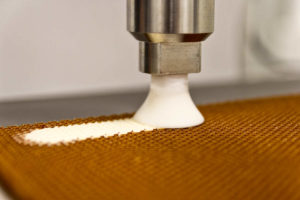 Until now, a frequently used process would be carried out as follows: A worker places a template on the honeycomb to be filled and “kneads” the epoxy resin into the cores at the appropriate points by hand until the individual shapes are completely filled. The 2-component material EC-3500-2 B/A must be mixed in advance. The worker weighs the components according to the prescribed mixing ratio and then kneads them by hand – until the components are apparently well mixed. A very complex process, with weaknesses in terms of consistent quality. In the automated test setup, the filling compound is removed from a 20-liter pail. From the point of view of dispensing technology, however, almost all container sizes from a cartridge to 1000-liter drums are possible. The material or the individual components are conveyed through a hose to the dispenser, which is mounted on a robot or an axis system. In the case of the 2-component material, the components are homogeneously mixed in a mixer at the outlet of the dispenser. Any shape can then be dispensed via the relevant handling system. ViscoTec has developed special nozzle geometries for these respective dispensers which enable a clean and complete filling of the honeycombs. The combination of automated movement and individual nozzle design allows the honeycombs to be filled according to any pattern. The hollow microspheres contained in the potting material, which help to reduce the density, are not destroyed during dispensing with ViscoTec pumps, thanks to the material-friendly endless piston principle. This could be proven by density measurements. In the course of these measurements, the dispensing speed was varied and increased to the maximum. In this way, the maximum stress on the material in the ViscoTec pumps could be illustrated. Meanwhile, material samples were taken from different positions in the system and their density was determined with a pycnometer. The measured density always remained unchanged. 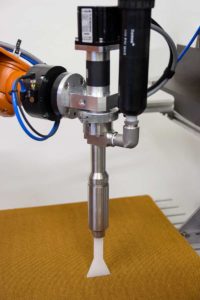 Simon Widderich, Business Development Aerospace at ViscoTec, confirms the positive cooperation with 3M: “The results of our joint test series are totally convincing and show the enormous potential of this process. We are delighted to be able to offer our customers a system with which they can increase the efficiency of their production to a great extent”.

Here you can find the video of the dispensing tests:

Go to the original article:

Dosing solutions for every need
For all liquids and paste-like medias.

We would like to advise you in finding the optimal solution for your needs.